“We did it together” and 4 walls in district “Obelia 2” in Sofia with a new outlook.

The “We Did It Together” project is an initiative of a young man who has grown up and is currently living in the Obelia neighborhood. After participating in EU Erasmus + project planning training, Plamen Beshkov planed and step by step began realizing his idea.

Within a month he met with people from the neighborhood, students, the headmaster of a local school and with the mayor of the Vrabnitsa district – Mr Mladenov. Vandal-scratching walls, dumping garbage in unauthorized places, indiscriminate posting and posters that are a common sight in other places in our city. However, the idea of ​​Plamen is not to complain about who does what or has not done, but to invite people from the neighborhood and transform the area together. He believes that a beautiful and colorful urban environment contributes to a more harmonious and inspiring everyday life, creates mood and infects good as the unruly and dirty area provokes you to throw away your waste and do not care about the terrain.

However, Plamen is also trying to find a solution to another problem: ethnic diversity in the area is a cause of much controversy and conflict. Living in the Roma area is something that continues to cause resentment and tension among the rest of the population. Trying to live outside the ghetto and beyond its rules, the Roma do not feel much appreciated there, Plamen believes. Not accepted by their neighbors. Plamen believes that if these people come together to work together for the sake of improving the space they inhabit together, they will be able to communicate together, get to know each other, and see that apart from differences, both groups can find something in common or at least something, to make their lives together acceptable and less stressful.

There were found followers: from the Municipality of Vrabnitsa, the Public Board of Telus International Bulgaria and “На тъмно” store, accepted the idea and supported it financially – to purchase materials and provide a paycheck for 3 artists.

The ideas of what to paint on the walls in the neighborhood were decided after discussion with children and young people from both ethnic groups. In the course of the studies and discussions, the two groups learned interesting things about each other:

but the most interesting thing a girl shared was “I am Bulgarian. We don’t even listen to Roma music at home. I do not know anything that I can say specifically about us Roma.

You may have already seen the walls, the locals have started sharing photos on social networks and sharing the joy of transformation. Comments came up to raise funds and continue painting other walls in the area, which is wonderful.

Here are the walls, designs and locations: 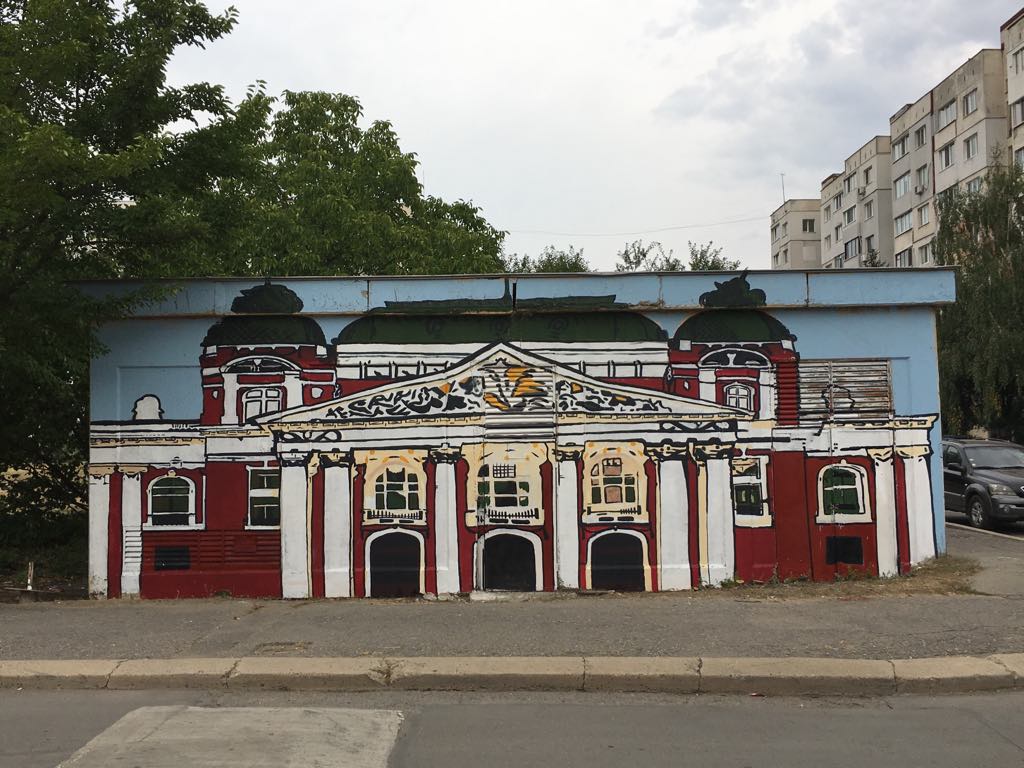 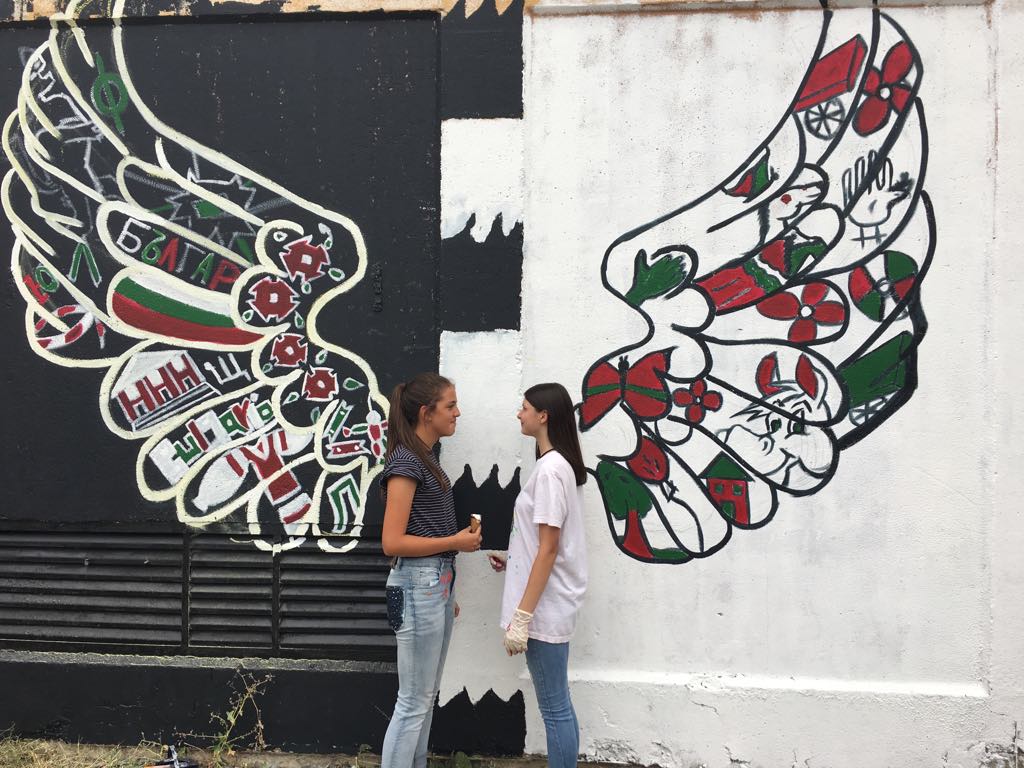 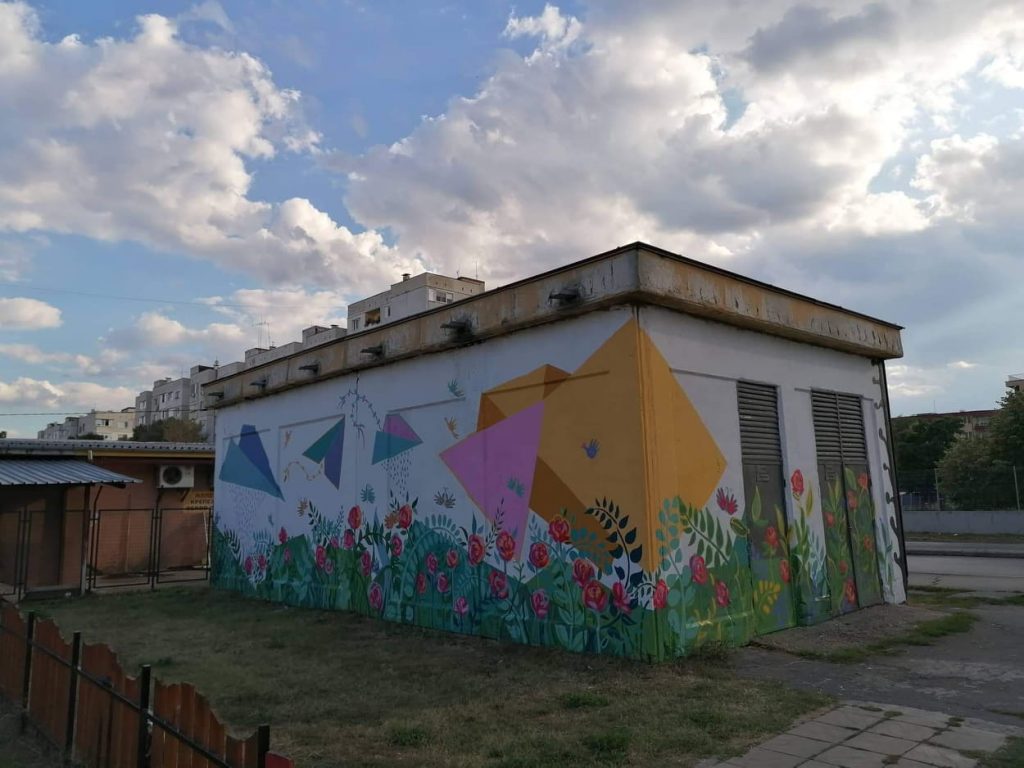 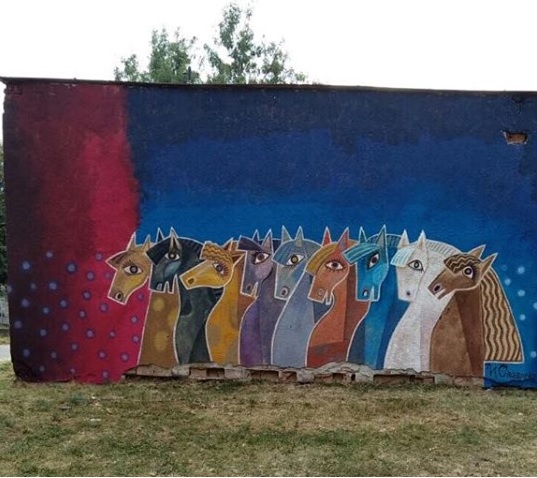 Location: To the Community Center in Obelya

A little story about the projects:

Wall 1 presents a landmark building in Sofia: the National Theater. The idea of ​​promising to look a little more interesting is to inspire participants to “transfer” site locations from the center and to give their neighborhoods the feeling that they are not in the periphery. That there are beautiful and important places and that “visiting” them every day will make your day more interesting and reassuring. As Sofia citizens, we are all proud of our beautiful buildings. But the theater is culture and emotion that teaches us, first and foremost, humanity. We chose this theme for the first wall to encourage more people to think and visit theaters.

Wall 2: Obelia’s Angel Wings. There are already several similar walls in the world, with which city guests are photographed and share on social networks. Obelia has such wall now. In the wings are inscribed various symbols: martenitsa, lion, horse, cart, houses (symbols of family and independence), flags and…. (look for other surprises). Come and take a picture! Remember when posting your photo to write #Sofia, #Vrabnitsa, #Obelia.

Wall 3: Kites and butterflies. The project is designed by young parents in the area, and is located next to the playground in front of flat number. 235. Children deserve light and beauty, and kites are a favorite theme of any child, irrespective of their ethnic origin. While we were thinking about the project, we were talking about Hadat Husseini’s, The Kite Catcher, and the kite contests in Afghanistan. And because the book is a very vivid and impressive account of the long journey of suffering and the struggle of a nation against the violence it continues to face today, hope must not die. A kite poet is something that should always be encouraging and encouraging to us.

Wall 4: Horses – perhaps one of the most sacred things in both cultures. For the Roma, to this day the horse is a symbol of the status of the family, for the Bulgarians – it was the most sacred animal of the past, so long as the flag of the Bulgarians was a ponytail. 7 beautiful, magical horses are painted on the wall next to the community center. Power, freedom and will. And above all, something we all love.

2 more walls are currently under construction in Lulin 2. Thanks to the support of the sponsors and the participation of local people, several locations in the outskirts of Sofia will have a new look.

The project is being implemented with the support of: