Welcome to the heart of traditional costumes

Bulgarian national costume has always been a powerful weapon in the struggle and maintenance of the national spirit during the periods of Ottoman domination from the 15th to the 20th century. The traditional costume takes on great value during the Bulgarian National Revival (20th century) which allowed the people to free themselves from the Ottoman yoke.

All have a function, a reason for belonging and a symbolism. The costumes of women and men made it possible to indicate social condition, marital status (widow, fiancée, married,…) and geographical status. Female costumes are richer than male ones. The women embroidered and wove their clothes themselves, trying to keep the old patterns, bequeathed by their ancestors.

For women, the traditional costume consists of a long shirt open at the front and a top suit or simply a skirt. The shirt is embroidered and the scarf is an integral part of the married woman’s costume. Various accessories are added: wool stockings, an apron, a special belt and jewellery.  Each piece is interdependent, including jewellery, ornaments, headdresses and even the way you do your hair. They carry many decorations, fabric applications or refined and rhythmic embroideries, each with its own meaning.

There are four main varieties of Bulgarian national women’s costume :

Men’s costumes are divided according to regions:

– the white costumes, the oldest

– the black costumes, common in the central part of the Rhodopes, consist of a tunic shirt in frosted tunic, dark wool pitch, an upper garment and a naked cap.

After Bulgaria’s independence in 1878, many changes were made to traditional costumes. Even before 1878, a significant change has gradually taken place in urban areas. Bulgaria wants to imitate other European countries: the long shirt, for example, is shortened to become an undergarment and embroidery begins to disappear, replaced by lace. In the city, the scarf is exchanged for the hat. The fabrics also began to be dyed and were no longer handmade, linked to the industrialization of the late 19th and 20th centuries.

The pafti and the pendari are elements that distinguish a married or engaged woman from a young girl.

The pafti are made of copper or other metal and sometimes inlaid with horn, bone,… The metal would have the power to repel evil but also symbol of fertility

The size of the belt can vary as well as its shape: oblong, rectangular, palm tree or round. The belt is often decorated with plant motifs, scenes or animals. 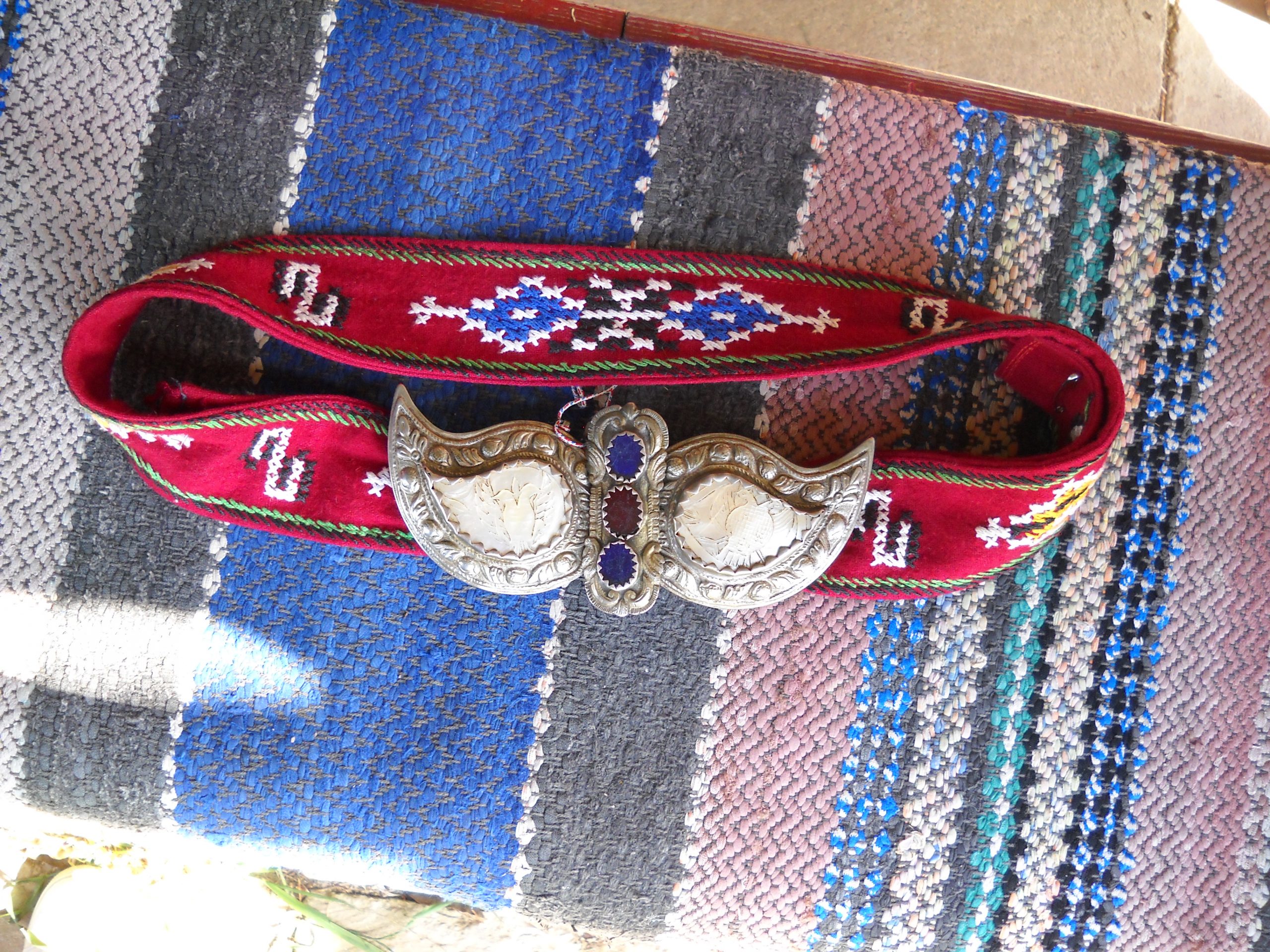 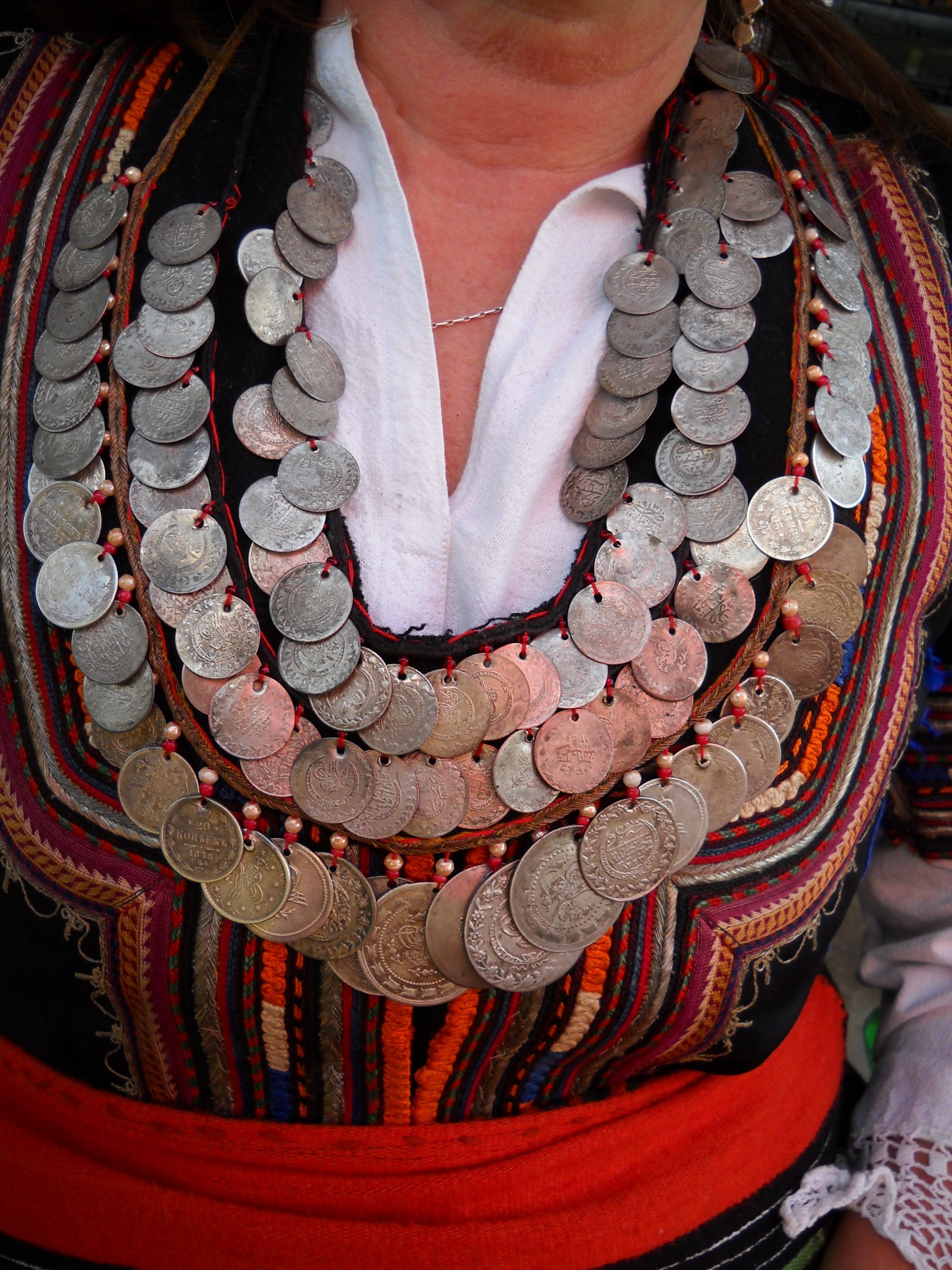 The pendara is the popular name for a gold coin that circulated in the Ottoman or Russian empire (equal to 5 Turkish lire). This currency has also been transformed into a decorative piece for traditional costumes, particularly in Bulgaria. The pieces are attached with strings to form a pendant or attached to earrings, belts, headdresses, etc.

This coin is important because it indicates the social status of the wearer and his family. Thus, the coins can be made of gold for rich families but also of silver, copper, bronze, brass,… Ornaments are an important part of traditional costumes even if they are not made of gold.

The coins can no longer be used as coins. They are perforated at the edges to pass through the yarn.

Pendants in pendants were women’s jewellery but were also gifts, for example during baptisms.

Embroidery is difficult to do and requires a lot of time and carries the symbolism of the whole Renaissance. It began to disappear from clothing during the 19th century.

From the age of 12, the little girl learned to embroider, which required a great deal of mastery.  Embroidery had great symbolic importance: it protected the body from evil.

Complete symmetry is absent in the ornaments, because the Bulgarians believed that complete symmetry was a work of the devil. This is why elements were added or removed to avoid symmetry: mistakes made on purpose, the purpose of which was to protect against the evil eye. According to the belief, cutting an embroidery from a garment opened the way to evil and the person became vulnerable. The Bulgarian woman was not allowed to embroider after her marriage, she could only resume her activity from the moment her daughter reached the age of 12.

The women knew a hundred embroidery stitches, but over time we forgot them. 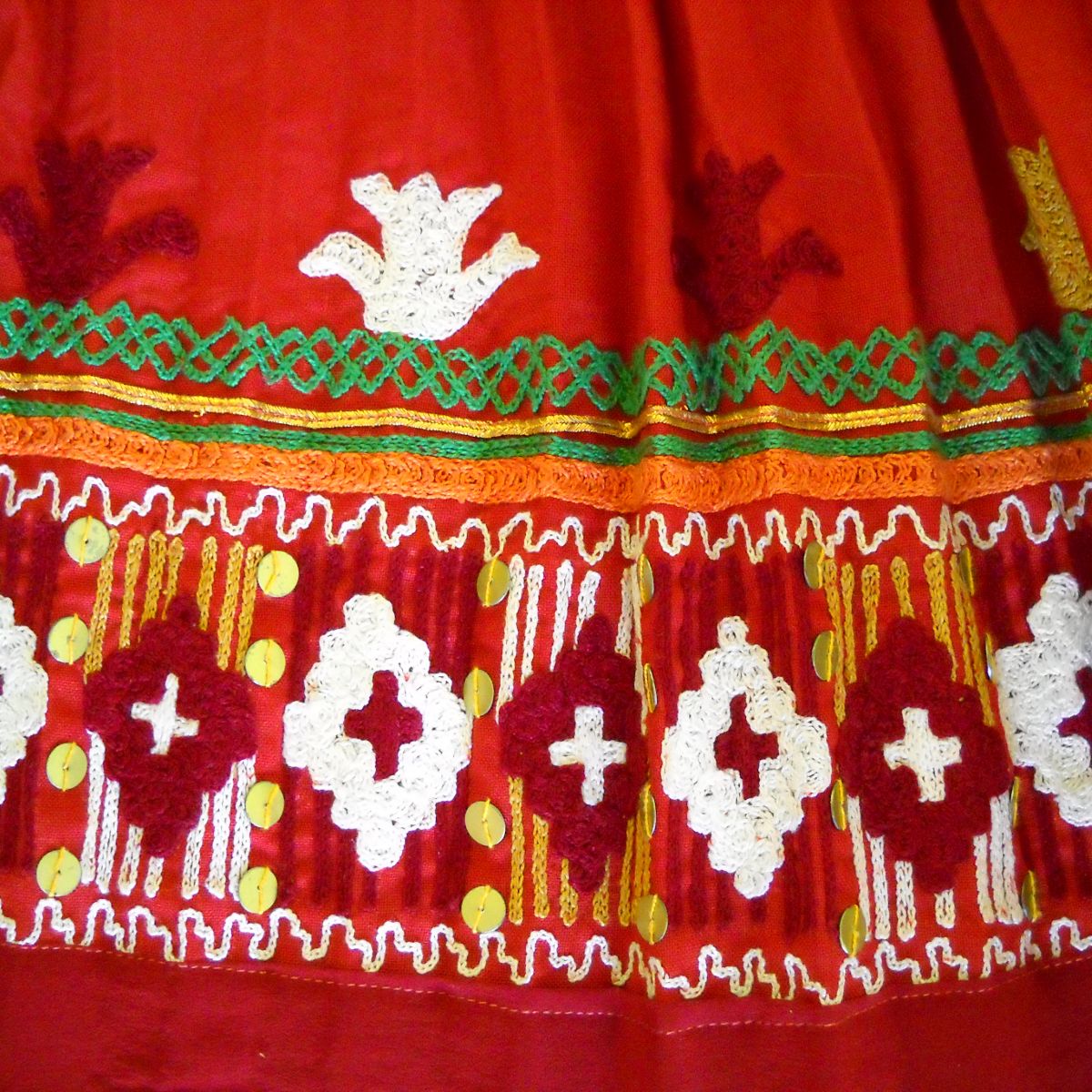 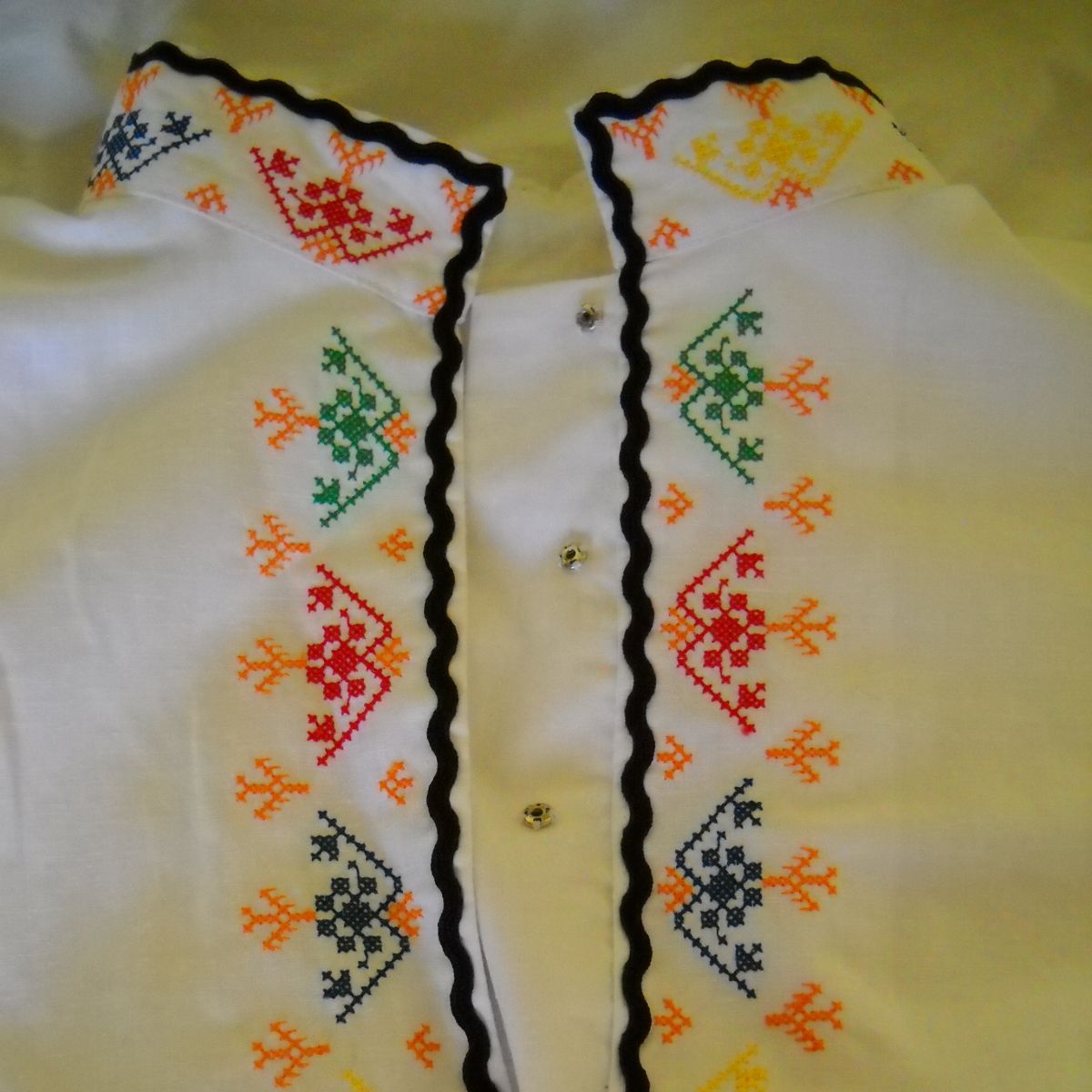