The chitalishte (“Читалище”) is a public institution, non-governmental  specific to Bulgaria : a community cultural center. These cultural centres are located throughout Bulgaria, in both large cities and smaller villages. The term chitalishte means a “reading room, a place where books are kept for public use). : chital- (reading) and ishte (place where preceding verb happens).

This intuition leads cultural, educational and artistic activities. It also aims to safeguard Bulgarian customs and traditions. They create a cultural life and thus give access to culture. This place has different functions : a theater, a library, dance and music school.

Unesco selected it in 2017 to be part of the Register of Good Safeguarding Practices of Intangible Heritage.

The chitatalishte appear in Bulgaria still under the Ottoman Empire domination, at the beginning of the third period of the Bulgarian National Revival. The first ones emerged in 1856, in Shumen, Los and Svishtov area. They were founded by volunteers and received private donations.

Their activity is mainly centred around the rebirth of a Bulgarian consciousness, the rediscovery of national history, literature and theatre, the dissemination of independence ideas.

The chitalishte of Preslav is founded in 1874, called “Razvitie 1897” it’ s the oldest and largest in the municipality of Preslav with 11 members. In this center proposes folk dancing and singing lessons, poetry lesson, materials to play pop-music and organizes many traditionnals events/celebrations. It also a theater and a library which offers artistic and cultural workshops for children 2 days per week. The lesson or activities are free or very cheap. It’s the ministry of Bulgarian Culture who finances it. 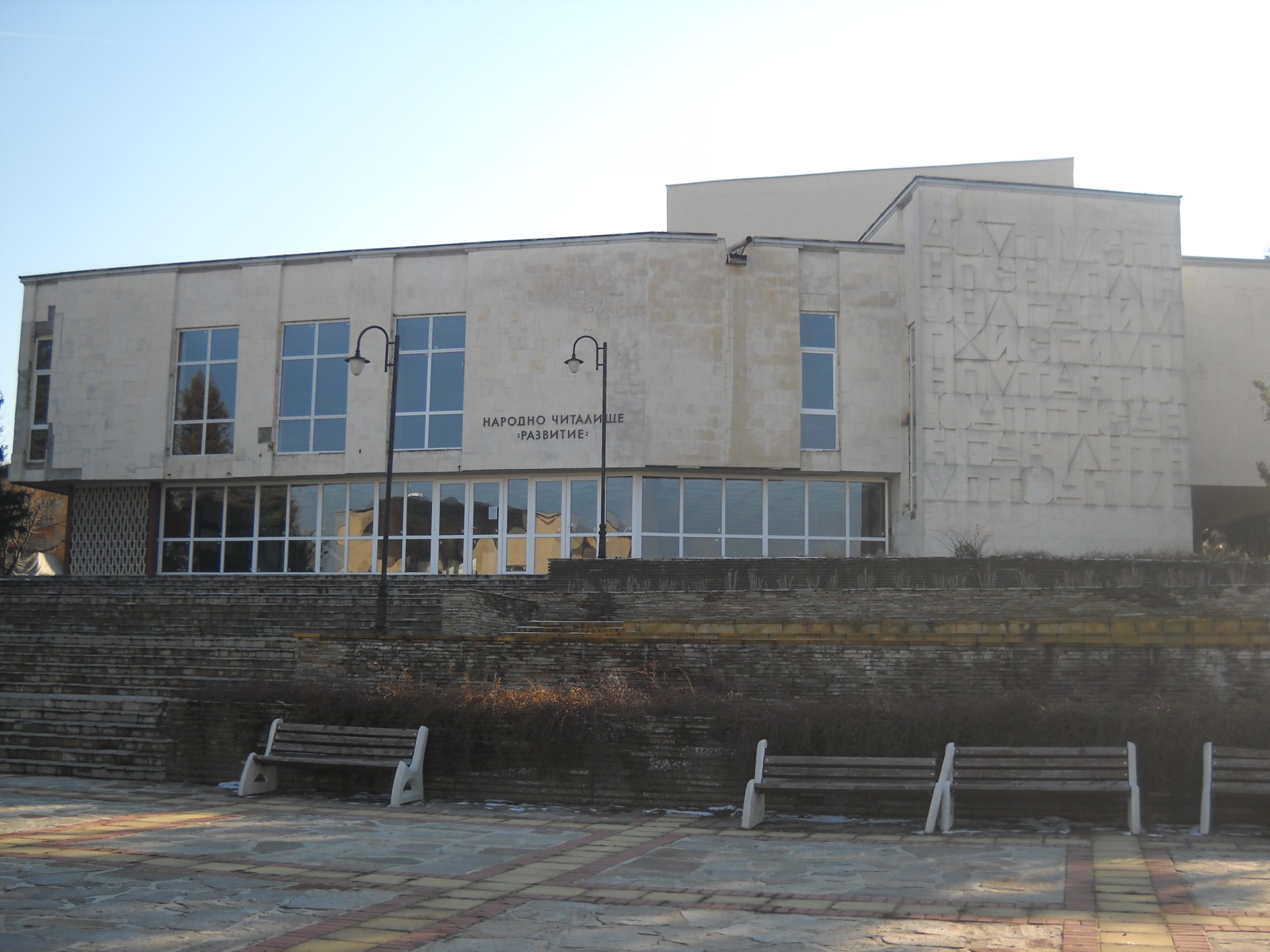 For someone who has no idea, what exactly is a Chitalishte?

What is the mission of the Chitalishte?

– The mission of the Chitalishte is to provide access to the population to our culture to teach them about our cultural values, to preserve our traditions and customs,

What kind of lessons can you take in Preslav’s Chitalishte?

– We have various different lessons here and they are very accessible to the public because they are either free or cost very little bit of money.  The lessons include Bulgarian folk dancing and folk singing for all ages, pop singing, Artistic speech and poetry.

Are there lessons on musical instruments?

– Unfortunately, no, at least not right now. We do not have an orchestra here, we only have a few musicians but they don’t give lessons. Also since not too long ago we have a rock group in our Chitalishte.

How many Chitalishtes are there in the region of Veliki Preslav?

– In the Municipality of Veliki Preslav there are 11 Chitalishtes and the biggest one is Preslav’s Chitalishte. Biggest as in its physical size and also in its activity and the number of people it occupies. In every village and town, the Chitalishte is located in the center, near the municipal building, which shows how important it was and it still is, to the local population. And Preslav’s Chitalishte is the oldest one in this region. It dates back to 1874.

When was the first Chitalishte ever made?

– The first ever Chitalishtes came into existence during the period of the Bulgarian National Revival. Every Chitalishte has been made only with voluntary donations of renowned patriotic Bulgarians most of whom were teachers. At first the Chitalishte was only a place where people could gather and read in secret Bulgarian national newspapers and magazines about the organization and progress of the liberation process. These newspapers and magazines were forbidden by the Ottoman Empire because they were propagandist and their point was to make the Bulgarians rebel and uprise against the empire. And actually, the word “Chitalishte” comes from the Bulgarian verb for read “cheta”/“чета“. It was also a place where Bulgarian activists could gather and have meetings in secret where they discussed ideas for organizing riots and the whole liberation of Bulgaria. Throughout the years, the Chitalishtes evolved to have libraries and stages where they could do plays, theaters, and later on, project movies.

Right now, is the Chitalishte a Non-governmental organization?

How does the financing of the Chitalishte work?

– So, most of our funds come from The Bulgarian Ministry of Culture, but we also get a bit of income from hosting concerts, competitions and events. We also receive a little bit of donations from charitable people.

Does the Municipality take part in the organization of Events?

– Most often, we organize the events together with the Municipality, but sometimes we have to do it on our own. The Chitalishte takes part in the organization of every event, but the municipality doesn’t, so some of the events are done only by us. We try to celebrate every Bulgarian holiday and mark every important historical event.

Do you have difficulty in attracting young people to the activity of the Chitalishte?

– No, because usually their parents have taken part in the activities of the Chitalishte at some point of their life or they still do, so they make their kids follow their footsteps. It is harder for us to explain some of the customs to the younger kids because we recreate them in the exact way they were, and with their specific dialect so the kids have a hard time understanding them.

Does Preslav have its own dialect? Is the dialect still here? Are there any books documenting it?

– Yes, there is a dialect specific to Preslav and its region and it is still here, it hasn’t disappeared. There are books that describe traditions and rituals in dialect and we use them as a reference to recreate these old traditions. But usually dialect is passed on verbally.

What was the position of the Chitalishte during the communism?

Is there some kind of cooperation between the Chitalishtes in the area? Do you organize things in coordination with the other Chitalishtes or does everyone do things on their own?

– Every Chitalishte does things on their own and is responsible for creating events in their own town or village. Very often groups from one Chitalishte participate in events organized by another Chitalishte in another city. We work independently but we do communicate and help each other out. And we visit each other often.

How did you end up working for the Chitalishte?

– I’ve always been interested in traditions, arts, painting and I am also a historian. So, when the previous woman that had worked on this same position for many years retired, the held a competition to find the best candidate for this job. Between about 15 other candidates, they chose me and this is where I’ve worked to this day, but I’ve always been passionate about culture, traditions and arts. I practice drawing, folk dancing and I also lead a group where we research and recreate these old traditions with their specific dialect.

Does the Chitalishte have lessons on making traditional costumes?

– No, we get our costumes from independent tailors who recreate these kinds of traditional Bulgarian costumes and they cost a lot of money. Most of our club members buy their own personal specifically tailored to them costumes.

Do Chitalishtes always hold competitions when there is a vacant job position?

– At least in our Chitalishte, yes.

How are the finances of the Chitalishte controlled?