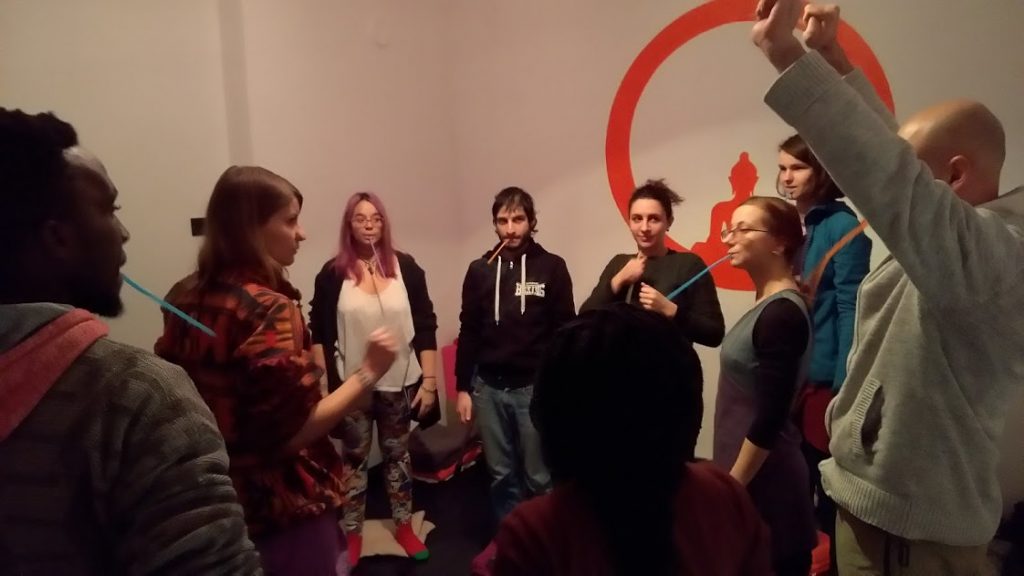 By Open Space FoundationJanuary 26, 2018 The Blog of Angie, Uncategorised

Last week, on Wednesday, I took part in my colleague and friend’s workshop about communication problems and physical reaction of the body to stressful and hateful situations. 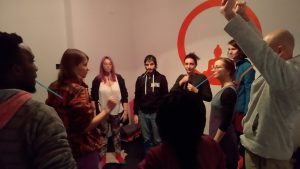 Florentyna, my colleague in Open Space Foundation, is a painter and mostly an abstract artist. She usually express her ideas and believes through colorful paintings, but, for a change, she decided to organize this workshop with contact improvisation and (I would say) “therapeutic” screams.

Could screams be a therapy, and for what?

I, personally, believe in screaming. I scream at everything that I don’t like, loudly or internally, without any problem. But mine is a personal and private catharsis, not a public outcome. In which way this workshop helped me, then? Why I have a positive feeling about it?

Because is way hard, really, to channel your feelings at command. If I’m angry, I scream. If I’m frustrated, I cry. If I’m happy, I smile. If I want to eat and can’t…I kill people. But all of them are reactions of my body and mind to the input that I’m receiving, in the same very moment. When it comes to workshops, you can’t obviously experience your own moment and feeling, you need to “feel” the others. The topic. Now, last Wednesday, I was feeling happy. My own body was reflecting this happiness caused by the promise of a 5 days holiday with my loved one, starting right after the workshop. I was not willing to scream at nobody.I was peacefully daydreaming. But, suddenly, it started. Flora, the same girl I saw shivering because of anxiety in an entire week before the event, she started to speak and she was perfectly calm. I was hit by the idea that every art, including workshops about communication, is based on acting. But because acting, as Dorian Gray would say, is the mother of both arts and social societies, I felt an unexpected wave of interest flowing through me. Let’s do this, I toughed. Because of this interest, I felt ready to really try, I put myself in the topic, open and serious, like actors do during rehearsals. I was able to respond to the exercises because I wanted to, just like our “host”, Flora, was finally free from her anxiety in the moment she started to do what was scaring her: to talk in public. Because, and this is it, if she came up with this idea for the workshop, the communication problems, is because of a real fear of her own. Not to be understood, in a different language and country, is terrifying for the majority of people. Lots of stressful situations are born in this fear. Even hate and hate speech could be generated by the fear of diversity and non communicability. At least, this is my personal view on the matter. So, back to the point, I screamed on people I was not mad at and they did the same to me. It was strange, even uncomfortable in the beginning. But then it happened, the ah-ah moment: during one of the exercises, I was lying on the floor. I was supposed to yell at someone standing tall over me. I was feeling helpless, fragile and small. And I remembered. I saw myself, tall like a dolly, dressed in white and red, with my hairs pinned in the top of my baby head in a crazy bunny (my mother’s style, very  ‘80s). I felt myself run, crash in a tiny bed, and starting to scream at the top of my laughs, out of discomfort. I closed my eyes, the 27 old eyes that I have now, and let my young and doll like self flow through me. It was amazing. I still know it, that feeling, that infantile frustration, that vicious, highly compressed hate. I released it. And it was wonderful. I acted my pain, the anger of a baby dolly, 20 years after the actual moment of discomfort. And I felt, in a way, improved. Healed from a considerable amount of anger. New.

I can’t say that it was easy, nor that I have become a fan of those kind of “gather in circles and close your eyes” kind of things. My ego is still way too punk, and relativistic, for this. But I see potential. In me, in my friend, Flora, that had the idea and pursued it, no matter what her fears were, and in the most gracious and fine of all arts, acting, that can teach people how to become humans.

For a deeper understanding of the topic, I’d like to add here some afterwards conclusions from Flora herself, about the workshop and the idea behind it, I hope you’ll enjoy:

For me was important to explain to people, by movements, what hate and stressful moments can be because bodies respond in emotional, physical way. I believe that if people are able to learn this, they will be able to create their own way to understand and remember. In a different way, because to feel things and situations on a very personal, physical level (on your very skin) is the most powerful lesson they will ever learn in this world full of not useful information.

and is part of the project “Freedom of (Hate) Speech“.
It is funded under European program “Erasmus+”,
KA 1: European Voluntary Service and Training Course for Youth Workers.